Expenses exceeding income. However, revenue is expected to be higher in the next fiscal year

Paramount is in the first year of a “structural” deficit, according to the preface to the proposed 2020-2021 budget.

The budget said “it is very possible” that staff may ask the council to consider putting a sales tax measure on the March 2020 ballot.
However, the same document also projects that Paramount will bring in $3.46 million more next year than this year.

“While our local economy remains steady, expenditures continue to increase, outpacing revenues. As a result, funds that were previously saved up over the years are proposed to be used in order to balance the operating portion of the General Fund budget,” according to the document.

“We believe we are now at a point where we are in the first year of a structural budget deficit,” according to the document.

“We are predicting approximately $48 million in revenues, which is $3.46 million more than the current year,” according to the document.

“The bulk of the increase is related to restricted funds that have been awarded for specific projects,” according to the document.

“In contrast, the General Fund revenue forecast will be decreased by about $201,250 to a total of $26.9 million,” according to the document.

The budget listed the sources of cost jumps, including the L.A. County Sheriff’s contract (a 5% increase) and other contracts, the State minimum wage law (impacting part time personnel), and a Cost of Living Adjustment (COLA) for full-time employees. 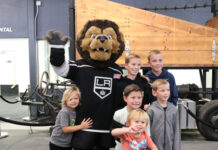